Friday July 24th we screen Sunrise, the psychedelic second feature film of Partho Sen-Gupta. Patho grew up in Mumbai, where he started working in the Bollywood studio’s at the age of sixteen. He received a scholarship to study at the prestigious film school La Fémis. Ever since, he has been living all around the world. In April Sunrise won the prestigious The Black Tulip Award at Imagine Film Festival. We interviewed Patho about the making of his second feature film, his struggles and ideals.

“Could you explain why it took you ten years to make your second film?”

Almost immediately after ‘Let the Wind Blow’ (2004) came out, I wrote a scenario for a second feature film, but I had trouble getting the funding.
The problem with art-house cinema today is that the production process has become very industrial. While normally a lot happens on set. There is no room for experimentation anymore. There are many norms, also for scripts. If a script doesn’t fit those norms, you have a lot of difficulties getting it produced. My scripts don’t have a lot of dialogue. Despite my descriptions they never have the ninety or hundred pages it requires. At some times I would increase the font size, but it never worked.
With Sunrise I got into the Locarno Film Festival – Open Doors co-production and from that moment the ball started rolling.

“You studied in Paris and lived abroad since then. How come did you still want to make a film about a social issue in India?”

I never lost contact with my home country. And the story has a very personal angle to it. When I was a young boy I was playing with my friends and some people tried to kidnap me. Naturally they did not succeed, but the story stayed with me for a long time. 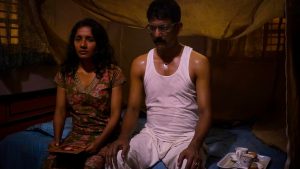 When my daughter was born I started researching about the missing children and I found a lot of very disturbing information. The amount of children disappearing not only in India but also in the rest of the world is insane. After drugs human trafficking is the second biggest business in the world.

“You seem to believe that a story can create a certain awareness, but at the same time, you stay away from the classic storylines.”

I wanted to go away from the normal narrative: because the Indian cop story has been told many, many times before. The film is much more about the psychological scope of a human being. As human beings we have an inherent need for justice. So what happens in a situation when a child goes missing and you know that you are never going to find it again? It is the most horrible thing that can happen to a parent and a child. Is the human mind capable of finding the justice it seeks?

I also dealt with the idea of masculinity. The story is set in a very traditional Indian background. The wife is passive. She’s expressive about her pain; she is passive in her suffering. She expects her husband Joshi to do something about it.
He as the man feels castrated because he knows he can’t do anything about it. So he constructs a delirium, a kind of fantasy, in which he becomes the hero he is expected to be. I believe our dreams are a projection of what we would like to see. Joshi’s fantasies change according to his needs. Some of them seem real; some seem fake and some even entirely illusionary. He cannot sit down and cry because he is affected by his vision on masculinity. And our whole society is shaped by the structures of masculinity and femininity. For me this is a very important aspect. It is after all, a structure of power. 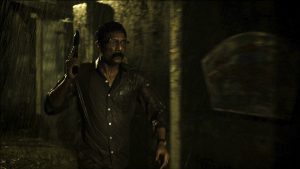 “Your visual style is quite hypnotic, even bordering on magic. We were reminded of Gaspar Noë or David Lynch. Was their work an inspiration? Can you tell us something about your influences?”

I suffer from a condition called Sleep Paralysis, which makes me experience terrifying but very realistic dreams. After years of trying to find a cure, I accepted it as a part of my psyche. Now, I can control these dreams and even try to explore them instead of being scared of them. I think that, in part, Sunrise and the protagonist Joshi are born from those experiences.

Lynch is definitely a great inspiration for me. I think I was mesmerized by ‘Twin Peaks’ when I first saw it on pirated VHS cassettes in the ‘90s in Mumbai. I was only used to seeing films with a linear and realistic narrative, and when I saw Lynch, it reminded me of the skewed and disjointed narratives that I saw in my nightmares. Somehow it reassured me that one could make sense of it despite the non-linear and unreal aspect. Gaspar Noé and Winding Refn’s films also have the same mesmeric quality that I admire. I can watch their films again and again and always ‘see’ something more as if they have an invisible deeper meaning hidden under the superficial aesthetic exterior. The protagonists and the situations look real but there is something existentially unreal about them. Their gaze is deep and distant and they suffer silently in their destinies. Joshi in Sunrise suffers too, and all that we see may not be real. But I also have influences from filmmakers like Dreyer, Lang and Welles. I’m also a very avid graphic novel reader and love European artists like Milo Manara, Jodorowsky etc.

“How do you see yourself in the context of India filmmakers? Do you have an connection to India’s horror-films of the eighties genre do you feel kinship to more recent filmmakers like Anurag Kashyap or Qaushiq Mukherjee, who both border between arthouse cinema and genre-cinema?”

“I do not see myself as part of any national identity. I was born, raised and started working in cinema in India but then I studied film direction and lived for more than two decades mainly in France and then in the UK and now in Australia. Due to my wandering nature, nations find it difficult to include me in their cinematographic histories and thus I don’t feel any kinship with them.”

The Indian horror cinema of the ‘80s was a very small and insignificant part of its cinematographic history. Growing up in Mumbai in the ‘80s, mainstream cinema (Bollywood) had a hegemonic control over the screens. But I was an avid film club goer. I watched great films by great filmmakers from the world over at ‘houses of culture’ of the competing cold-war powers. They all felt that they should impress their cultural propaganda upon us. I was also watching and working with a lot of ‘New wave’ Indian filmmakers like Saeed Mirza, Ketan Mehta and Sudhir Mishra. I think that genre cinema is an integral aspect of art-house cinema because it is more daring in cinematic exploration. I think it takes more risks about the subjects it treats, the narration, the acting, the lighting or the use of sound. It is not just an aesthetic or plastic choice. 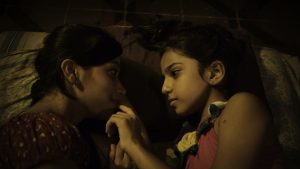 “Tell me something about the amazing sound design.”

It was always the plan to create a hypnotic soundscape. The images were already there, but we needed to get into Joshi’s head. I wanted to create the universe he was in. There had to be a constant going away and coming back: a balance between real and the imaginary.

I worked with Eryck Abbecassis, who is a noise artist, and with Nicolas Becker, who did the sound design. It was quite complicated, because they way I’m explaining it to you; I was explaining it to them as well. We had quite a few disagreements. Ken Yasumoto, who is Caspar Noe’s sound designer and who is really good, was the supervising sound editor. He brought in the rain and he had some great ideas. And then there was another man, Gurwal Coïc-Gallas, who also came up with some great ideas…

“Sunrise paints a harsh, grim picture of India’s reality. How was the film received in India?”

Very badly I think. India is a proud and young nation that does not like any criticism. The Indian press collectively ignored the film during the screenings at the Mumbai Film Festival earlier this year. We are trying to get a suitable censor certificate and hope the board will allow the film to be seen by a large demographic and that it can cause some discussion about the terrible situation of missing children. 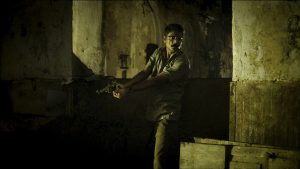